WHU produces relatively the most start-ups in Germany

According to a new study by TUM, WHU is the No. 1 start-up stronghold relative to student body size

Which university in Germany produces the most company founders is determined and published in various surveys such as the "Gründungsradar" of the Stifterverband or the "Deutscher Startup Monitor" of PWC, the University of Duisburg-Essen and the Bundesverband Deutsche Startups e. V. (German Startup Association). As a rule, the results vary widely. The Technical University of Munich (TUM) assumes that this is due, among other things, to the method of data collection. This is because for the aforementioned studies, surveys are conducted at the universities themselves and are accordingly characterized by subjective assessments of their own performance.

In order to provide a more objective picture, TUM, in collaboration with Blockrocket, GlassDollar and Sigma Squared, has now launched its own ranking, which draws exclusively on archive data from external data sources such as Crunchbase, LinkedIn, and Deutscher Hochschulkompass. Only the number of start-ups of graduates of the respective universities is consistently considered. The study is thus clearly results-oriented.

The new benchmarking method for entrepreneurship performance of German universities also differs from previous rankings in that it not only looks at the total number of start-ups, but also relativizes this to the number of students studying or having graduated from the school. This makes it clear that while larger state universities such as TUM or Ludwig-Maximilians Universität München (LMU) with more than 10,000 students produce the most startups overall (67 TUM, 52 LMU), a relative comparison shows that small, private business schools are proportionally more startup-productive (based on number of startups per 100 students in the winter semester 2020/21). For example, for every 1,371 students at WHU - Otto Beisheim School of Management (data source: Deutscher Hochschulkompass), there are 48 startups, which puts the private business school in Vallendar, Rhineland-Palatinate, at the top of the list and also in third place in the ranking in absolute terms. 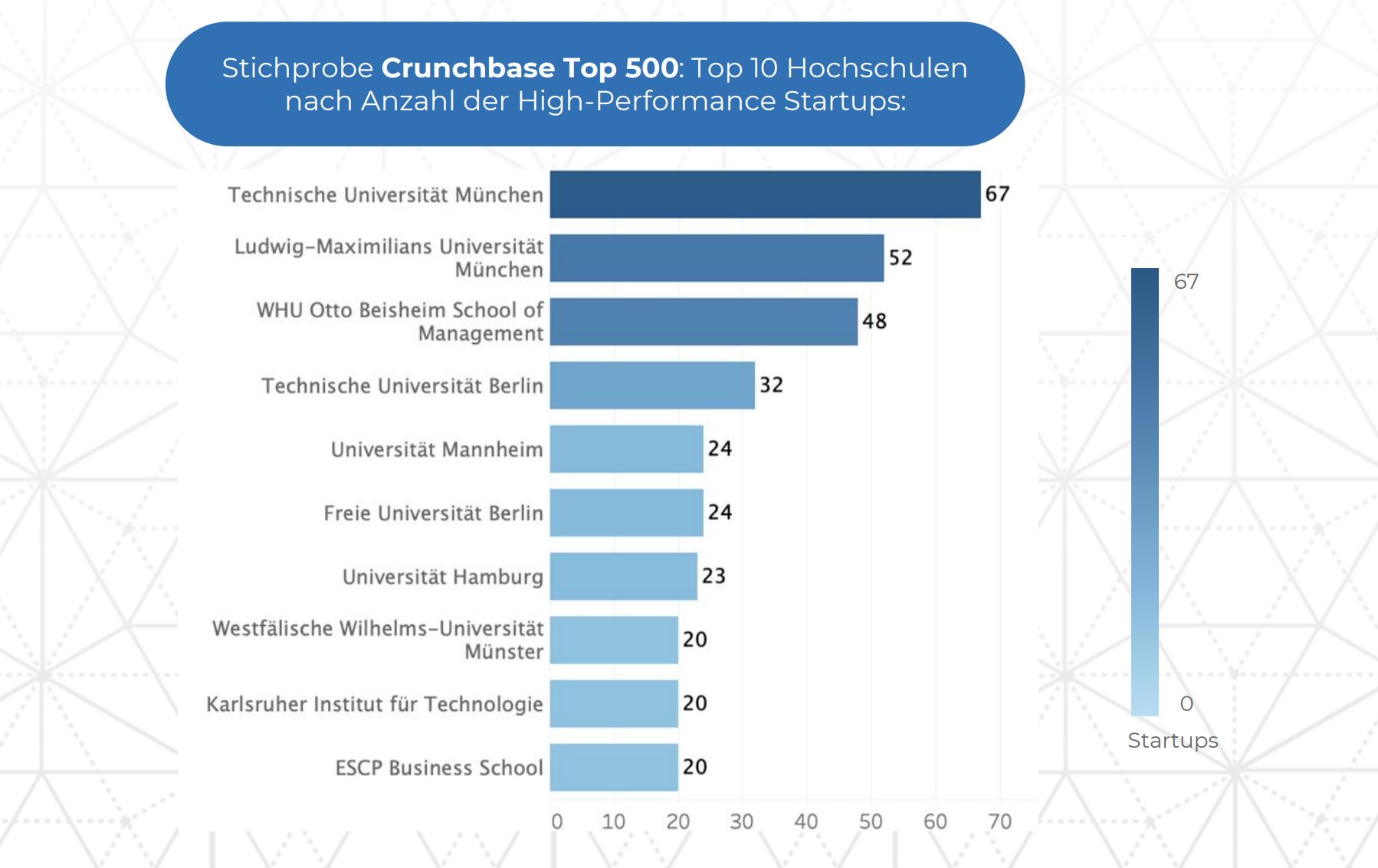 WHU, whose graduates have already founded 10 so-called Unicorns valued at at least one billion US dollars - including names such as Zalando, Hello Fresh, home24, Flixbus and Rocket Internet - is thus the start-up stronghold of Germany. Only in ninth and tenth place respectively do the state-run University of Mannheim and TUM follow in this relative view.

The authors also derive recommendations for university policy from the results of their study. For example, they suggest offering start-up content early on in the course catalog and awarding ECTS credits for it. In addition, students should be able to work flexibly and determine their own responsibilities and timelines for their projects, and university staff themselves should have start-up experience. The authors also state that university-related, external entrepreneurship programs as well as entrepreneurship ecosystems contribute significantly to success.

Detailed results of the ranking can be found here: https://www.entrepreneurshipranking.com