Just as the fall season was welcoming students back to campus, it was also steeling itself to say goodbye to others. Such was the case last Friday, with those enrolled in the master’s programs at WHU – Otto Beisheim School of Management sitting side by side at the town hall in Vallendar to bring an end to their intense studies. With their family and friends (more than 1,500 attendees), the graduates will assuredly remember that crisp September day forever.

After a brief musical introduction from Chopin, as rendered by WHU alumnus David Baumgärtner (BSc, 2014), Dean Markus Rudolf took the stage, lit up in blue and violet, to address the graduating body. “I usually try to address students with something entertaining,” he began, “but this year I have to say something serious. We don’t know what the winter will bring, and we live in times where democracy is at risk. And you are still very young and have the power to make a difference. You’re going to be thought leaders in your companies, your environments, and your countries. And you’re much more capable than others of shaping the future and changing the world.” After giving the audience something to think about and thanking the teams and students at WHU for making the day possible, he introduced keynote speaker Harm Ohlmeyer, Chief Financial Officer of adidas.

“Today is about all of you,” Ohlmeyer said to the graduates, complimenting them all on the three values they have all shown: courage, respect, and authenticity. “And I have tremendous respect for what you’ve all done.” He echoed Dean Rudolf’s words, noting the role the previous generation had already played in pushing society forward. It is that same role the next generation—these graduates—will play. Once Ohlmeyer’s speech arrived at its conclusion, Dr. Steffen Löv, Program Director, was joined by his colleagues, Academic Directors Professor Christian Andres, Professor Ralf Fendel, and Professor Christoph Hienerth, to invite the first group of students to take the stage. Hundreds of graduating students were present on the day, collecting their degrees and celebrating the moment in person. 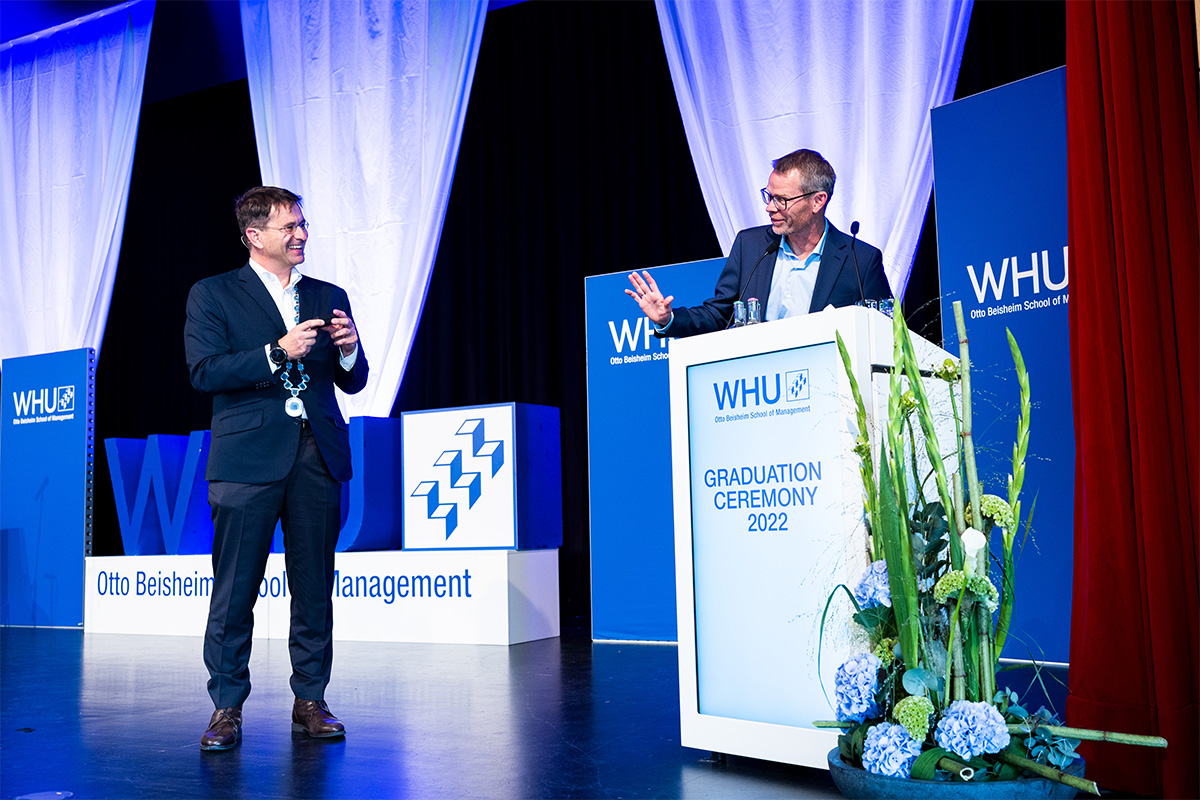 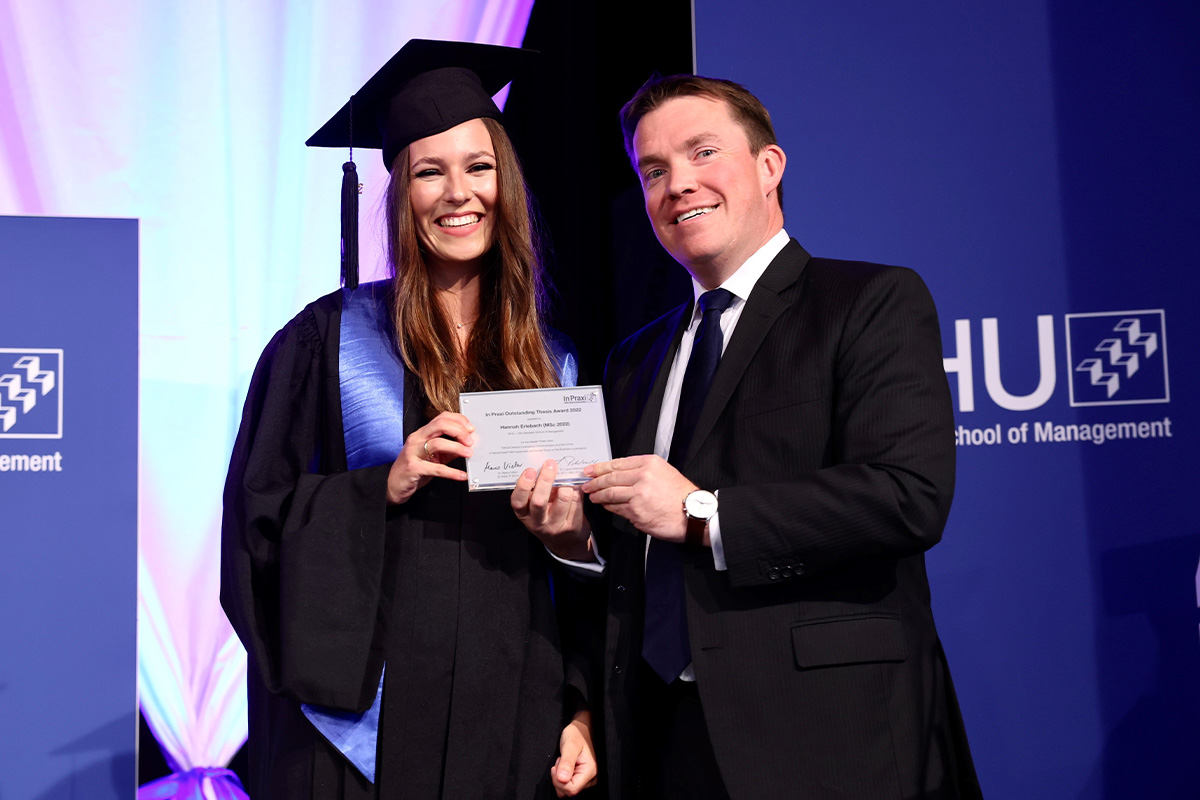 Dr. Marco Vietor, chairman of the board of In Praxi e. V., awards master graduate Hannah Erlebach the In Praxi Best Thesis Award 2022.

On stage, the family feeling was palpable, evinced by students and staff alike showing their admiration for each other. As the last wave of students retook their seats, class speakers Justus Schroeder and Pauline Schneider of the master's programs took the microphone. “What we have achieved at WHU goes beyond the courses we pass,” said Schneider, who, along with her speech partner, noted the challenges they all faced—countless video calls, the internship selection process, and writing a lengthy master’s thesis—and thanked the WHU Community for their continued support. “Not every limitation has to be a setback. It represents an opportunity for positive change and positive growth.”

Although their time at WHU may have come to an end (for now), the students will always be linked to their alma mater through the efforts of In Praxi, WHU’s alumni network. And, fittingly, with handshakes, diplomas, bouquets of flowers, hugs, and words of affection exchanged, the final speaker to stand before the full house was In Praxi Chairman Dr. Marco Vietor. As is customary, the organization seeks to honor the strongest academic efforts of the students enrolled at WHU. This year, the recipient of the In Praxi Best Thesis Award in the Master’s program was Hannah Erlebach (MSc, 2022) for her robust and forward-thinking analysis of fundraiser communication and donor behavior. The In Praxi Best Thesis Award in the Bachelor’s program was awarded to Alica Komorek.

Before the ceremony officially concluded, Nishtha Puri (MSc, 2024) and Julius Krippahl (BSc, 2025) performed an original acoustic piece for the students to wish them well. And with that, the classes of 2022 stood up for their final photo-op together as students—and their first as WHU alumni. After the official graduation ceremony, the students continued the festivities first at the graduation ball in the Rhein-Mosel-Halle and finally at the after-party in the Kurfürstliche Schloss (Electoral Palace) in Koblenz. “It was an amazing evening, where we finally were able to celebrate our successes in person together with lots of members of the WHU community,” said Dean Rudolf, summing up the evening.